South America is in the news these days because of the fires that have swept through parts of Brazil and neighbouring countries in recent weeks. Having just come back from one of the most seriously affected countries and having read considerable amounts of misinformation, I feel I have to share some observations drawn from this visit and the more than twenty five years I have lived and worked in Bolivia.

The use of fire has been part of agricultural practice not only in the Amazonian lowlands but also in the Andes for as long as anyone can remember. It is basically a method of clearing the ground of dead vegetation, fertilizing the soil (albeit briefly) and stimulating new growth, especially of grasses, for grazing animals. Its practice is reported to be on the increase particularly in the Amazon lowlands where it is seen as a mortal threat to the remaining forests. The issue is politically charged. In Brazil the right wing President Bolsonario has suspended environmental controls and is accused by NGOs of giving free rein to loggers, cattle ranchers and settlers who want to exploit the unoccupied frontier lands of the Amazon. In Bolivia, a president from the opposite side of politics, Evo Morales, has encouraged settlers to clear forest and even confiscates “undeveloped” land from landowners or organisations involved in conservation efforts. Environmentalists on the other hand condemn fire outright (at the same time as condemning their governments) without understanding or at least acknowledging the role it has always played in agricultural practice. What in fact is going on? The situation is more complicated than appears in the press and involves land and forest management practices, economic pressures, a range of different habitats and climate change. 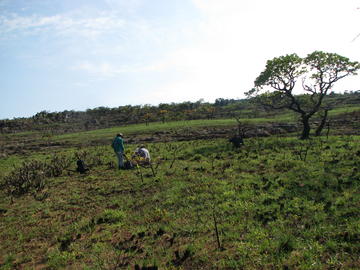 The beginnings of regeneration after an extensive cerrado fire in 2007/8. This area is very rich in plant species and had fully recovered a few months later

In human modified landscapes grass and weeds grow rapidly during the tropical rainy season but become coarse and dry later in the year much as they do on English roadsides. They also harbour mosquitoes and other pests so it has long been the practice to burn off this vegetation with the added advantage that the new young shoots that appear after the burn provide food for the smallholder’s animals. Such fires are carefully controlled as no homeowner wants their house burnt. Much the same happens on a larger scale on the extensive cattle ranches of larger landowners but these fires are relatively low intensity or very controlled fires and only sometimes spread into nearby forest areas. You could argue that burning always contributes to higher carbon dioxide levels in the atmosphere but the alternatives are labour intensive or expensive. Cutting vegetation with a machete is the only viable alternative for a poor farmer (but there is no immediate regrowth and the cut material needs to be disposed of), while the use of strimmers or heavy-duty mowers is only an option for richer landowners and is costly and hardly beneficial environmentally.

The fires may, in fact, be more intense this year for various reasons. Eastern Bolivia was already dry in March 2019 at the end of a poor rainy season so by August this year the vegetation was tinder dry. Adding to the drought is the on-going drainage of wetlands to create pools to provide water for cattle in the dry season. However, I have seen similar fires before and am not convinced this year is so exceptional. In 2007, for example, the dry season was prolonged and by the time the rains came in late October, most of the savannas and some of the dry forest in the Chiquitania had burnt. To try to understand how fire functions in eastern Bolivia and much of Brazil, it is necessary to be aware of the different biomes and habitats involved as well as the changes they have undergone in recent years.

There are basically two kinds of natural habitat in this region – savanna and forest, although these are often conflated popularly and by environmentalists as “Amazon forest”. The South American savannas of Bolivia and Brazil are known as cerrados and comprise a mosaic of different physiognomies from open grassland (campo limpo) to low woodland (cerradao) and may be wet (campo humedo) or rocky (campo rupestre), this last sometimes functioning as a natural fire break. The unifying feature of the cerrado is that it is a fire climax vegetation, its characteristic species adapted to withstand fire and in many cases stimulated into flower by fire, the “natural” fires being usually started by lightning during electrical storms in the September-November period. The three important protected areas of the Chiquitania region of Eastern Bolivia (Noel Kempff Mercado National Park, the San Matias area of Integrated Management and The Departmental Reserve of the Tucavaca Valley) all contain substantial areas of cerrado where fire will occur naturally if not started by man, and where it is a necessary event to maintain the habitat. Over-frequent burning is unlikely as there will be insufficient biomass to set off more than a small grass fire until dry vegetation has built up sufficiently. The biggest danger is over-zealous prevention of fire by park guards and others, which can allow the biomass to accumulate in excessively large quantities so that when fire inevitably happens it is unusually powerful and destructive both to cerrado trees and to adjoining areas of forest. Whether this has happened this year, I am uncertain. 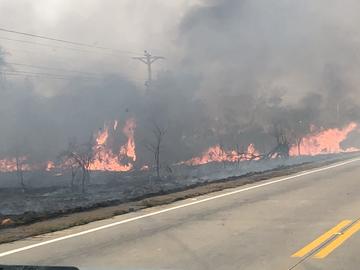 A high intensity fire in 2018. The flames are rising high and destroying almost everything in their path, threatening the power lines as well.

Forest, in contrast, does not burn naturally. I believe this to be true both of the Chiquitano dry forest in Bolivia and of the wetter forests of the true Amazon region in Bolivia and Brazil. Why then are they burning this year? In some cases, it is the result of small-scale slash and burn as a result of settlement on the frontier and in other cases the result of wholesale clearance by agroindustry or clear felling for timber extraction. Agroindustry sometimes acts relatively responsibly, at least within its own lights, by only burning dead trees, which are massed into large funeral pyres on ploughed land so preventing fire from spreading into the adjoining forest or savannas, but this is not always the case.

However, many of the forest fires can be explained as a consequence of long-term forest degradation. Many intact forests are only superficially so having been damaged by selective logging both by timber companies and by individual settlers. The larger and more useful trees have been removed leaving an open forest, which is rapidly colonized by shrubs, creepers and, perhaps most dangerously of all, by invasive grasses such as Panicum maximum, Hyparrhenia rufa or Rottboellia cochinchinensis. Of course, if left long enough the original forest might regenerate but this is virtually never the case and would take many decades. In the dry season the grasses and creepers die back producing a large biomass of dry material which acts as fuel for fire spreading from nearby savannas or adjacent scrub or, more probably, lit by someone wishing to clear the forest for agriculture. Many of the fires seen recently occur in this way. 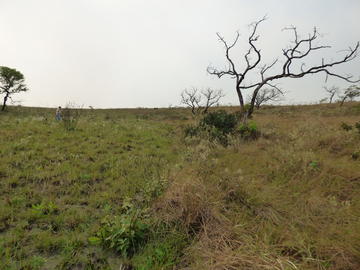 A rare and sadly limited example of fire management in the cerrado. Efforts to have controlled burning seem desirable.

Forest fires as opposed to savanna fires are nearly always environmentally destructive and the focus on prevention must be directed here. The use of aircraft and water tankers as an emergency measure to stop fires in their tracks is usually ineffective and always too late. The damage was done years before when the necessary conditions for fire were created by encroachment and degradation. Selective logging and the construction of access roads through forest cannot be seen as relatively benign activities but as the primary cause of forest degradation and consequent fire. A vicious circle is established where uncontrolled settlement, road construction and selective logging open the way for invasive grasses and a proliferation of undergrowth creating a dense biomass which provides the fuel for destructive fire in the dry season. Sadly, the news focusses only on the fires and ignores the underlying causes of their deadly intensity. The fires we are now seeing are the side effect of longer-term degradation and a more pronounced dry season, perhaps resulting from long-term climate change. If we want to stop the burning of the Amazon forests, we must first stop their progressive degradation.

There are challenges here for anyone involved in the conservation of the savannas and forests of South America. In the case of forests, while legislation and its enforcement to prevent clear felling, both small-scale and large-scale, is clearly desirable and necessary, the more subtle threats need to be addressed. An important step is to prevent forest degradation by restricting commercial access and limiting exploitation to sustainable uses, principally by traditional communities living in the forest. In the case of the cerrados an intelligent management regime is required in which fire is accepted as part of their natural ecology and in some cases initiated by park rangers and other environmental workers before biomass has accumulated to dangerous levels. Savanna fires are not a justification for environmental panic.