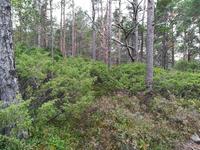 Juniper in the understory of pineforest to the south of Flørli

For my DPhil I am studying recent native reforestation in the Scottish Highlands. Using sites planted by the NGO Trees for Life up to 30 years ago, I am attempting to better understand how aspects of the ecological community and ecosystem functions change as the forest regenerates, and how this compares to the heathland that dominates the surrounding landscape. However, the treeless state that predominates across Scotland represents a history of deforestation, and the high deer population prevents natural tree regeneration outside of fenced areas.

To understand how different the situation in Scotland could be, I took a trip across the North Sea to south-west Norway, to visit recently regenerated forests in an area that is climatically and geologically very similar to the Scottish Highlands. Led by Duncan Halley, a native Scotsman, who has lived in Norway for 26 years, we visited a range of sites across south-west Norway with a very recent history of forest regeneration. Living in Norway, Duncan became aware of the parallels between Scotland and Norway, similar weather conditions and underlying soil types, but a key difference: over the last half a century there has been an explosion in forest regeneration across south-west Norway. 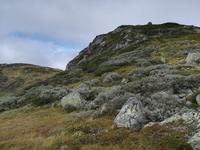 This reflects the dramatic declines in grazing livestock from the mid-20th Century onwards, which has seen trees rebound in response. The scale of forest cover in the areas we visited was incredible, every fjordside and hilltop seemed to be covered in birch, even colonising scree and bare rock in places. Whilst in the areas of pineforest we visited, very similar in feel to parts of my study site in Glen Affric, the diversity of regenerating tree seedlings and the range of heights they represented was the stand out difference. Juniper was an abundant part of every forest understorey, towering into the canopy in many places. Berry producing shrubs were everywhere, mixtures of blaeberry, northern bilberry, cowberry, crowberry and cloudberry. Most striking of all was the ubiquitous montane scrub zone, marking the transition to the treeline, with multiple willow species and carpets of dwarf birch. 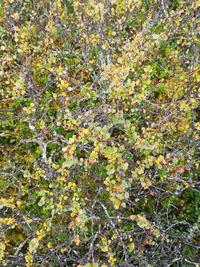 A carpet of dwarf birch in the montane zone near Bjåen

While the difference in grazing pressure underlies the difference in the amount of forest cover and its status, the main drivers of this difference are far more complicated than that, tracing back to social and cultural differences between Norway and Scotland. Hunting is an important part of life for many Norwegians, and the presence of wild game within the landscape is crucial. Unlike in Scotland this is not at the expense of forest cover, and a huge range of large mammals roam the region. We saw moose on two different occasions, and frequently spotted their tracks and dung. On the way from Hunnedalen to Bykle we passed through 3000 sq km of protected land at Setesdal Vesthei-Ryfylkeheiane, an important reindeer calving location and migration route. Hunting is strictly regulated, and quotas are set based on the carcass weights of the animals harvested each year. These quotas reflect the health of the animals, indicating the amount of food and shelter available, and likely helps to balance woodland regeneration with browsing. It was striking how important the wild landscape is to most Norwegians: spending your weekends in the mountains is a way of life, facilitated by hundreds of mountain huts and marked hiking trails. Norwegians forage for berries during the summer months, fish in the lakes and fjords, and have an awareness of the different edible species in their landscape. Living close to nature and appreciating what it has to offer has led to the maintenance of a landscape that feels wilder than Scotland, yet the human population is incredibly integrated into it. 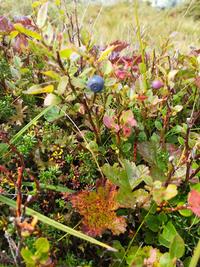 Norway’s recent increase in woodland cover has not been widely accepted by everyone. For the older generations who have seen a decline in traditional agriculture, the regenerating trees emphasise the decrease in livestock in the mountains. Despite this, the sheep that are still present in the landscape were prominent, partly due to their jangling bells. But, this demonstrated that lower numbers of sheep still grazing in the summer months are not incompatible with an increasing forest. The challenges that may be presented are logistical, with increasing tree levels acting as a hindrance to moving the sheep for their summer grazing. Social changes in farming practices have partly facilitated large scale tree regeneration, but for some Norwegians there is a sense of loss for the traditional farming practices and their associated culture. 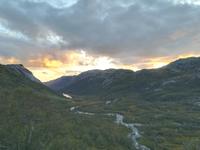 Sunset over the regenerating woodland in Fidjadalen

It has been inspiring to spend time in a landscape that is more strongly governed by wild forces than most of Scotland. I learnt from my trip that a seemingly simple ecologically driven phenomenon is underlain by a complex web of social and cultural influences, linked to the Norwegian way of life and human integration into the wild landscape. Connecting people and their actions to ecosystems may be the key to generating a rewilded landscape across Scotland, and the potential for a diverse rebounding woodland is incredibly exciting.

For the first week of my trip in Norway I took part in an Archnetwork study tour, funded by Erasmus+. Followed by a week of solo travel, funded by a Randle travel bursary from the Royal Forestry Society.