I am a member of the English faculty with a special interest in the history of science and collecting, and I'm a scholar of what we call "the material text". This means I don't just study the verbal content of literary texts, but a much broader context which is established by researching how people created, altered, and used original manuscripts, printed books and non-book items. A plant specimen mounted on paper, annotated, sent by post and then added to a manuscript which was itself added to over time and also used as a source for a printed text is a very rich object of study. I have transcribed, annotated and published a work by the 17th c. polymath John Aubrey, and I continue to work on him and his circle. 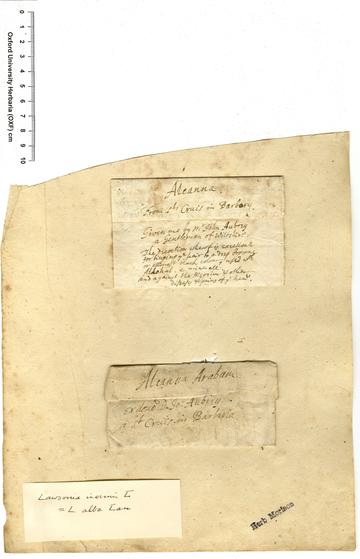 Stephen found in the Herbarium a hitherto unknown paper which Aubrey gave to Bobart, containing a henna sample. This was wonderful, because there is a matching paper in an Aubrey manuscript in the Bodleian, explaining in more detail how to use henna to dye hair. The Bodleian manuscript has lost its henna over the years, along with other similar material:  put these two examples together, and it's the perfect restoration job.  As this small example shows, Oxford's collections are very rich, and when you combine them all sorts of very close connections are made which challenge our understanding of matters as fundamental as what a book is, how it was created and read, how colours or newly encountered natural objects were described, and how the arts and sciences were related in the early modern era. Digitisation with a measure of contextual cataloguing will offer researchers a huge range of opportunities and make them available worldwide.  As these collections have a colonial context, and as we can only learn about material texts through precise comparison with similar collections worldwide, this global accessibility is extremely important. It's work which we can't just do while standing by Stephen in the Herbarium, as it takes a lot of time, collaboration, and serendipitous discovery. Being able to send a colleague in the US a link to a catalogue will be fantastically useful and enhance the value of the physical objects immensely.

When someone from the humanities looks at a collection like this, they see things that a scientist couldn't possibly appreciate might be relevant to current humanities research. I have the printed catalogue of the Herbarium, and it has its uses, but they are limited ones. If we can browse through digitised images, we can formulate precise research questions which would take a long time to evolve even if we were in situ, as it would take up far too much of Stephen's time. The paper on which the samples are mounted, for example, is so interesting and rich in meaning that it became the focus for a conference and an undergraduate special paper (the latter called Texts in Transition). The collection preserves the kind of material which is rare because it was ephemeral matter which usually got recycled and destroyed.  I myself have used examples of the Herbarium manuscripts for articles on punctuation and on early modern drafting--their gaps and revisions are fascinating, as is the way the paper is folded and how specimens are mounted on paper. There is even a rare printed poem stuck fast to an iris on which I've given part of a conference paper. The engagingly anecdotal and improvised verbal descriptions of the specimens and their original location and state are an interesting addition to the narrative of  early modern travel, collecting, and observation, because they are less rhetorical than the contemporary published versions. I also found that the scribbled rough notes were revealingly similar in method to those of important early modern historians whose collections are in the Bodleian.

I've taken my Magdalen students to see the Herbarium for the last few years and one of the earliest to visit is now proposing a doctoral thesis partly on what she found there.  I have had great results from introducing the students to this kind of material, and in fact sometimes they have sometimes found it more challenging and stimulating, and have asked better questions about it, than when I have simply showed them early literary texts. I teach a module on early scientific literature and there are so many ways in which the materials bring students closer to how early modern people thought about the things which were most important to them and which are explored in their literary texts. These include the origins of the world in the garden of Eden, the nature of knowledge, nature and gardening, collecting, travel and exploration, the proper use of language, and even satire. Having digitised copies of the collections allows humanities students to work on them outside the department in which they are housed. If they just visit, they get a tantalising glimpse of possibilities. Digitisation gives them the chance to develop their ideas independently, research them properly, and come up with original approaches to their work.

Dr Kate Bennett is a lecturer in the Department of English Language and Literature.